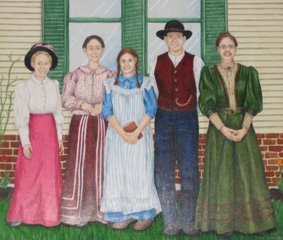 This is my most recently completed art project. Please forgive the glare at the bottom, that's what happens when your camera has a flash and your art has a high sheen of gloss all over it. Anyway, it took me long enough to finish. I think I started it in the early summer or late spring of last year. It looks pretty good though. Special thanks to Dan, Miriam, Janelle and Laura, who, along with myself happen to be my subjects. (Please don't hate me if you don't like how I drew you! I tried my best!) I hope everyone likes it.

Next order of business. February 19th I am leaving for my missions trip, so don't expect to see any updates or comments from me until after the 26th of February. I'll be mucking out Biloxi Mississippi from hurricane damage. I'll make a special post when I get back all about my trip. It might break my traditional layout of one picture per post. I'm looking forward to it, as it is my first missions trip. Time to get to know the co-workers real well as I get dirty with them. I'd like to commemorate the Audio A song "Dirty" as my theme song for my trip. I'll listen to it everyday. (Actually, I probably won't). But I'm sure I'll get dirty and stinky and all that good stuff.

I don't really have anything else to write about except this: Did I ever mention that I don't like typing on a PC keyboard? Everything's so spaced out and far away! Give me a Mac keyboard any day over this one!

And so this is farewell. Please pray for me as I'm on my trip, I can be a little bit of a Klutz and I don't want to end up with a nail in my foot, or fall off a roof. And pray for the people we'll be ministering to as well. This is a great chance to witness to them in their time of need. And as Lizzie goes off into the deep South, she hopes that her alter ego of Captain Klutz might stay home. He gets a little break next week from the everyday trials of WWII.

Behold, the Bean! (or My Field Trip of Dreams) 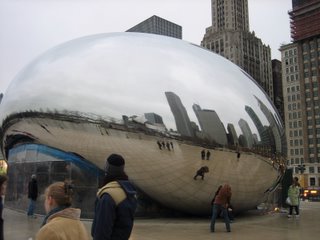 From a couple days ago to all days henceforth, this Bean in Millenium Park will hold a special place in my heart. *sigh* I suppose you want to hear the story. Okay, I'll tell you.
Once upon a time in the land of America, in the fair state of Illinois, there lived a young maiden named Lizzie. She worked at a publishing house where they made Bibles and books and all sorts of good things. At this company there also worked a young squire, of whom the maiden had "eyes" for. One day, the manager of the department where the fair maiden worked decided that they would all go on a field trip to the Big City. Lizzie was sad, because she so wanted the squire to be able to go so that she could get to know him better. "Oh well", thought Lizzie, "I'll have to make the best of it."
The day before the design department was to leave, they had a meeting. The squire, Squire P, happened to be in attendance. (Happened? Or was it more than chance? I believe it was the latter). The manager saw Squire P, and said "Why don't you come with us tomorrow to the Big City?" The squire made no answer, but Lizzie kindled a little spark of hope.
The next day dawned bright and chilly. Lizzie parked her carraige at the hitching post and hurried in so she wouldn't miss chapel. Chapel was a very important event each week. She sat down and enjoyed it, although the speaker had been on Oprah, which (in Lizzie's opinion) earned her a point or two on the annoyance scale. But the most interesting part, or rather two most interesting parts, happened one right after the other. First, Lizzie Bennett saw the other Lizzy Benet who worked there, wearing the same thing Lizzie was! How shocking! Secondly, Squire P was wearing denim trousers, on a Thursday! Unheard of! The only other people who were clad similarly were Lizzie's fellow co-workers who were going on the Field Trip! Did Lizzie dare to hope? I saw her spark of hope grow into a little flame.
The fair maiden didn't hear anything else until a half an hour before she was going to leave. Sir Stephen announced to everyone that Squire P was going to come! Lizzie could hardly contain herself, she was so excited! Carefully, she planned her next move. She knew what people were going to be driving the carraiges into the Big City, but she wanted to make sure that whatever carraige she ended up in, also had Squire P riding along.
When they left the company, Lizzie stuck close by the squire, and ended up leading him to an available carriage. Lizzie was even more excited! For the whole ride into the big city she rode next to Squire P and listened to all his stories with rapt attention. Never once did she hear him talk about a lady fair of his, which was what Lizzie had longed to know. She found that the more she found out about him, the more she liked him. The fair maiden felt like she was in a fairy tale, sans the fairy godmother with her itchy fairy dust.
When they all reached the Big City, they went to some exhibits and ate dinner at a local inn called the Green Door. Throughout almost the entire time, Squire P stayed close by Lizzie, and they dined at the same table, across from eachother! By the end of dinner, Lizzie couldn't control the enormously big smile that wanted to stay on her face. But Lizzie didn't care. It seemed like she had never been to the Big City before because everything seemed new and wonderful. At the end of the trip, all the other carraiges had left except for the one that Lizzie and Squire P had rode in, but all the people who had rode in that one thought that they should see the magical Bean.
The group set off, and Lizzie was almost skipping, and when they reached the magical Bean, she was standing next to the young squire. Everyone admired it, and when he saw it, Sir Luke said it would be fun to be a superhero in the Big City, and then Lizzie and Squire P agreed and eventually, they were all laughing and joking and having a good time together.
Needless to say, Lizzie will never look at the magical Bean in the same way again. It will forever remind her of the glorious trip into the Big City, and how under almost impossible circumstances, everything was brought together by the one who is way better than a fairy godmother.
And Lizzie had yet to see if they would live "happily ever after."
THE END
Posted by Lizzie Bennett at 3:32 PM 12 comments: