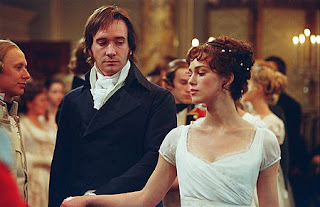 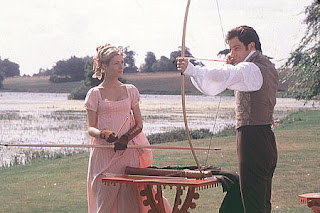 I am going to say a very unLizzie-ish thing. Actually it will almost put me as a traitor! But never fear, not a traitor to Jane Austin.

I have been sick the past few days, and as one usually does when they are sick, I did nothing. Nothing except to watch movies and ponder life. Now in pondering movies, books, and life over the past few days, I must confess my traitorous feelings. If given the choice between Mr. Darcy and Mr. Knightley (from Emma, in case you are not an avid Austin reader), I would pick *gasp* Mr. Knightley! I'm sorry Mr. Darcy, but Mr. Knightley has a lot of things going for him that you do not. For instance: Mr Darcy couldn't stand Lizzie's family, and wanted to live as far away from them as possible, and they hardly ever came to visit, (except for Jane and Mr. Bingley). Mr Knightley told Emma that he would live in her father's house if he could not bear to be parted from his daughter. Quite the sacrifice of independence. Mr Darcy had, shall we say, difficulties in admitting his faults (which were pride, arrogance, and as he did admit; his good opinion once lost was lost forever). Mr Knightley laid all his faults out right before Emma, he had humbled her, lectured her, etc, etc. Not to mention, Mr. Knightley never told Emma that he liked her against his better judgment. Now, Mr. Darcy did call that one back, but once said, it is hard to forget. To their credit, they were both good dancers. (Mr. Darcy is the one shown dancing with Lizzie, whist Mr. Knightley is the one pictured with Emma at the archery range in his "backyard", or shall we say "extensive grounds"). Mr Darcy DID own half of Darbyshire (not the miserable half), and did make up for all his shortcomings quite eloquently by redeeming Elizabeth's fallen sister Lydia and by forcing the rake Mr. Wickham to marry said fallen sister, and also by reuniting Jane with Mr. Bingley, but I think he must have been feeling an awful lot of guilt after finding out what a mistake he had made by trying to woo Lizzie by telling her that he liked her against his better judgment. Mr Knightley was Emma's friend for years and years, and it seemed only natural that their state of friendship move into the next phase, which of course was marriage. And Mr. Knightley was holding back because he thought she cared for Frank Churchill, who was secretly engaged to Jane Fairfax all along! The cad! How could he have led Emma on like that while engaged to another? But I digress.

Those are just the ponderings of a sick Lizzie, thought up between hacking coughs. Good thing my fish at work is named Mr. Knightley. Oh no! I hope he's still well after I've abandoned him to starvation! I'm sure he's being taken care of though, either that or he's on a hunger strike.

Lizzie's Favorites:
Lizzie's Favorite Book: Still trying to get through "Severe Mercy". There's a lot of poetry and wandering thoughts in that book.
Lizzie's Favorite Music: Still the Shuffle button on my iPod.
Lizzie's Favorite Movie: Well, let's see, what have I watched in the past few days... "Gone With the Wind" (now there was a foolish couple!), "Emma" of course, portions of Harry Potter #2 and #4, some "Little House on the Prairie" episodes, and "End of the Spear". That about sums it up I'd say.

Lizzie's quote of the post:
Sorry, I can't think of one, except for: "You can be thunder, because Thunder comes after Lightning! Ka-Chow!"
-Lightning McQueen from "Cars"
Posted by Lizzie Bennett at 8:13 PM 18 comments: 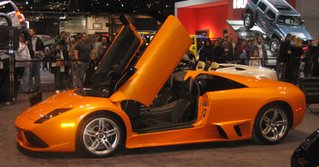 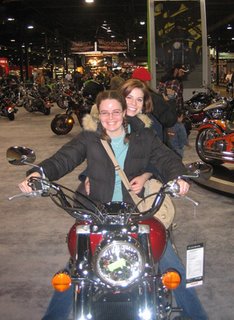 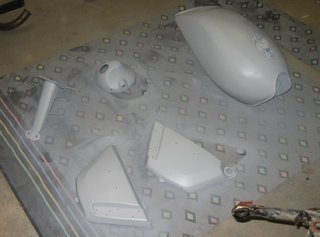 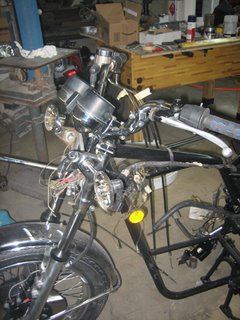 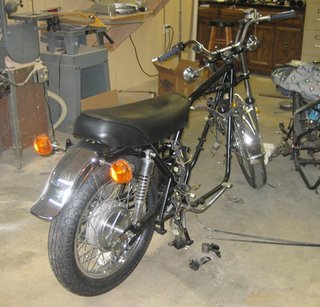 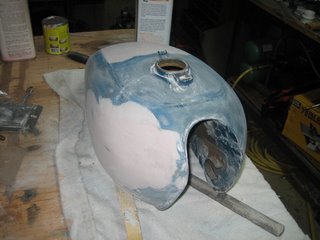 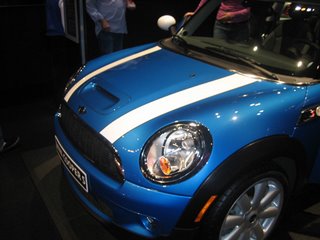 This week has been one of motor madness! Last Sunday I went to the Cycle World Motorcycle show. In one word: Inspiration. The photo of me and Aubrie on the motorcycle was from there. We're Biker Babes! Okay, so we're not really. I must confess, I went home that night and put some elbow grease into sanding down the bondo on my poor dented up gastank. The bondo picture would be the one with the blue tank and some salmon-colored gunk on it. Whew! My left arm sure got a workout that night! As you can see, I've also made some progress on the bike frame itself-Dad and I attached the airbox tonight. We also put the speedometer and tachometer on as well as some other controls and hooked up some wiring. Then I primed all the body parts: the gas tank, the side panels, and front and taillight pieces. It's moving along. . .Good thing too, I get to sign up for my safety training class at the end of this month!

I picked out the exact color sceme for my motorcycle yesterday at the Chicago Auto Show. I had the general idea what color I wanted, but now I've got the whole kit and caboodle worked out. See the picture of the mini cooper? Well, That's the color blue I saw that one time behind my car (coincidentally on another mini cooper). The extra feature? I'm putting those racing stripes on my bike too! Oh, it's going to be so sweet! Next Saturday Dad and I are going to buy paint. Yippee! Now, the quandry: my helmet is black. Just plain black. (Black was the cheapest color helmet I could buy in the kind I wanted. Either that or white, and white wasn't my size). I had this hairbrained idea to paint my helmet. Now there are two options. Option #1: paint my helmet all blue (the same as my bike) and put white racing stripes on it. Option #2: leave my helmet black, but put blue (or white) racing stripes on it. So I have to decide. It would be easier to just leave it be all black, but I don't know if I want to. A little extra hassle, and I would look pretty spiffy zipping down the road with a matching bike and helmet. Decisions decisions.

Now for the last photo that I didn't explain yet. That beautiful piece of work is the (now I'm trying my best to spell this) Lamborgini. Aaaahhhhhh. Ever since I was a little girl and saw a little matchbox car Lamborgini, it was my dream car. As a young impressionable girl, I used to think I'd actually own one. HA! Now I'll only own one in my dreamt up fairy tales. Besides, even if I had that much money, I don't think I could validate spending it all on a car. But hey, it's free to dream about it, right? I can imagine myself buckled into the driver seat, top down, cruising down some beautiful country road at top speeds. . . . . . . . . Feel the speed! The wind in my hair, the dryness of my eyeballs as the wind whips away all the moisture from them (that's how fast I'd be going. Oh, and there would be no police or other cars, just me and my Lamborgini); in my dreams is where that'll have to stay. Zoom zoom. I'm content with my Grand Prix and kz400 in real life.

Well, I hope you enjoyed my little bike update and had fun imagining yourself behind the wheel of your personal dream car. Until next time, remember that you aren't the only one on the road, and there are policemen, so go the speed limit or not too far above it. Happy driving :)

Lizzie's Quote of the Post:
"Die young, make a pretty corpse, that's my philosophy"
-Mark Lowry
(Don't get worried, I'll try not to die young. But then again, I don't control that either, do I?)

A Break in Tradition

I'm sorry I had to do this! You're looking at this post and saying what?!? No picture? That's right. The reason is a good one: I'm updating this at work because I'm waiting for something or someone on all my jobs. So to make the time pass a little faster, I thought I'd do a little good 'ole fashioned blogging.

I do intend on posting very soon after this one: I'm going to show some updates on my sweet little motorbike. It's starting to come along nicely. At the end of this month, I can sign up for my motorcycle safety training classes. I'm so excited! This past Sunday I went to the Chicago Cycle World Annual Motorcycle Show. It was great! On a good note, I didn't see any motorcycles painted the same color that mine will be. It's going to be one-of-a-kind! Only matching up with all those blue 2007 minicoopers out there.

So check back this weekend for some cool pictures of where my ride's at now. I'll get you all up-to-date on what we're doing to it then.

Quote of the post:
Did you remember to save. . . All of you files?
-Homestar Runner
Posted by Lizzie Bennett at 12:05 PM 6 comments: