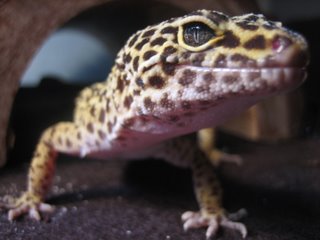 This is my gecko, Algy. He's a lot bigger than he was one year ago! I celebrated my 24th birthday almost two weeks ago. Next year, I'll be a quarter of a century old! Wow! But saying it that way makes me sound older than I really am. But you're getting older every day, right?

I'm sorry it took me awhile to update this. See, I was press-ganged into making a dress for the play, "An Inspector Calls", at our church, and I volunteered to make a dress for Kline Creek Farm. On top of that, I decided to have a costume party for my birthday, so, of course, I had to make a Regency-style dress for that. I looked very Pride & Prejudice-y. So after my birthday, I had a nice conglomeration of gift cards. That started all the trouble. I've become a DVD-aholic!!! I got Mary Poppins for my birthday, I bought Pirates of the Caribbean 2 with a gift card, I bought Finding Neverland (because I lost it a year ago; if I loaned it to you, could I have it back?), Anna and the King, and Milo & Otis with a gift card plus cash, but then I watched Cars (thanks Elaine), and I loved it, so I cancelled my Amazon order of Finding Neverland (hoping it would show up, I give it one more month and then it'll have been gone for over a year!) and Anna and the King, kept Milo and Otis, and bought Cars! Then I went to Target, and they had Zorro for $7.50! So I got it, and then I saw One Night With the King, and I was going to buy it when it came out, but thought that it came out next week, not this week, so to get the sale price, guess what I did, I bought it. Then, I made a BIG mistake: I went to Frugal Muse with Dan and Aubrie. I bought Gone With the Wind. Arg. No more DVDs until end of February! New law.

Now, in the middle somewhere of the saga above, I noticed that my debit card wasn't working. So I called the bank, and asked why. They took my card number, and lo and behold, I was overdrawing on my account! How? Did someone steal my identity? Debit card fraud? Did I wake up in the night and go online and spend $600 on some random e-bay purchase? So I headed over to yonder bank to tell them they had made a terrible mistake! After sitting with the most patient teller for two hours and fifteen minutes, we figured it out. A transfer of $300 that I had Dan do for me wasn't showing up right. Upon closer examination, we discovered, instead of going from savings to checking, it had gone from checking to savings! Yikes! So instead of having $300 more in checking, I had $300 less! That's like, a $600 gap! (The $300 was to be for my helmet, which I actually got for cheaper! Sweet!). Thankfully, after transferring the money back, I was only $10 down because of overdrafting fees. Whew!

And Lizzie's favorite quote:
You can be Thunder, because thunder comes after Lightning! Ka-Chow!!!
-Lightning McQueen from Cars
Posted by Lizzie Bennett at 10:41 AM 9 comments: 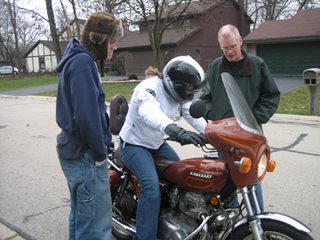 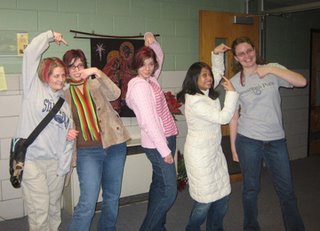 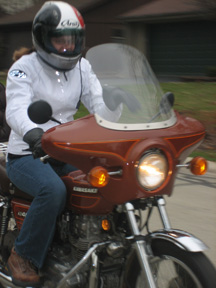 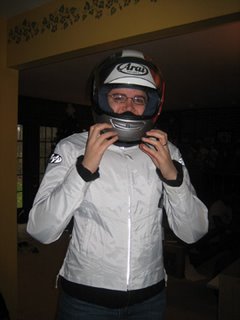 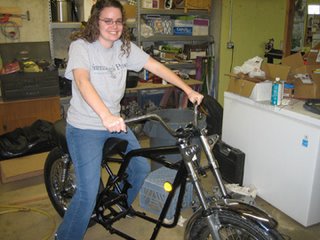 Sorry about the long space between updating. But you think I'm bad? You should check out Lady Fair's blog! Now talk about neglect! (Just kidding Aubs!)

Now, as you can see by the pictures, I've had a few exciting things happen. Firstly, notice the picture of me on the skeleton bike. That's my motorcycle! It's coming together isn't it? I'm so excited about it getting done. March 1st I can register for motorcycle training classes. Which leads me to my next photo. See the one with me in the motorcycle jacket and mom's helmet? (I just bought my own helmet today) I'm getting ready to go out and learn how to ride! Next comes me on the bike with Dad and Dan flanking on either side. They're telling me how to drive a motorcycle. Third in the set: I've taken off! There I go, down the block, driving for the first time! It was so fun, and SO cold! But it was worth it. That was the Saturday before Christmas. On Christmas day I rode again. That was interesting because there were a lot of cars parked on the street! Good obstacle training.

Now see the picture of me and four other girls? That was at the white elephant party for our Bible study group. Someone got a box of pink hair dye, and the five of us dyed out hair pink in the church bathroom. Talk about adventuresome! Another adventuresome thing I did was to go to uptown Chicago with five other people to stay with the Jesus People over New Year's weekend. It was a real experience. The Jesus People live together, in a sort of commune thing. Share and share alike. My group was put up in the penthouse (the building used to be a hotel). So we were 11 floors up and could see all the city. It was great. We served a lot of food to homeless people, explored the city at night, cleaned up parts of the building, and celebrated New Year's with the Jesus People. Well, I've got to go and watch Mission Impossible III now, but real quick, my favorites:

Quote for the post:
"Friends and Heroes is final!"
-Amber
Posted by Lizzie Bennett at 6:59 PM 11 comments: