I Am Motorcycle, Hear Me Roar! 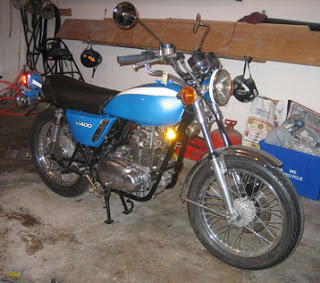 That’s right! Motorcycle will be roaring soon! (I hope). The engine is mounted in the frame, and the exhaust system is being installed. I’ve taken my first real lesson, and though it was a bit hairy at times, Dad said I did pretty good. I got all panicky at the end when we were driving through some neighbor hood streets. It all started when a cop was following me and then I got nervous and stalled the engine at a stop light. From then on it was mostly downhill as far as my performance goes. But never fear! I have more time to practice. Now you know what I’ll be doing on the nice weekends between now and May 18th! We hope to have the bike running by the time I have my Motorcycle Safety Training Course.

Something that you won’t be hear roaring is my iPod mini. It’s a sad iPod. The poor little guy just can’t hold a charge anymore. I figure in a few more months I might invest in a new iPod nano, brilliant blue of course, and I’ll gift poor little iPod mini to my two younger brothers. I’m not sure what they would do with a micro charged iPod though. Perhaps I should trade it in to Apple. Would they give me a discount off of a new one? I should investigate! Wouldn’t that be great? I’m just getting a little tired of wanting to listen to music at work, and then turning on my iPod only to have it tell me that it’s out of batteries. But as my brother reminded my, an iPod is a luxury, not a necessity. Therefore, if I have to gimp along for awhile on my unreliable old one, I will. It’s not the most pressing need in the world.

I was at the farm last Saturday, and the theme for April is Spring cleaning. I read over the script for the house tour, and I was inspired to “spring clean” my own room. It hasn’t been cleaned from top to bottom since we moved into this house. That’s been about five years I believe. So I’m going to scrape away at the grime over the next week or so, including washing my curtains, cleaning my walls a bit, vacuuming out under my bed and dressers, and cleaning all my nick-knacks and doo-dads and closet (shudder to think of that one!) It should be very nice when I finish.

Before I go, I’ll give a prayer request: my mom is having knee replacement surgery next Tuesday, the 24th of April. Please pray that it goes well and is successful, and that afterwards (when she’s all healed up) she will have no pain in her knee when she does everyday things. Thanks!

Lizzie’s Favorites of the Post:
Lizzie’s Favorite Music: Anything except the little “beep” sound followed by the dead battery icon on my iPod. More specifically on the anything, I would have to say Alison Krauss’ new CD, “A Hundred Miles or More: A Collection.” I just got it yesterday.
Lizzie’s Favorite Book: I’m done with “Silk” by Linda Chaikin, and now I’m going to start “Sanditon”, the last novel that Jane Austen was writing when she died. It was finished up by “Another Lady”. I hear it’s good from VERY reliable sources.
Lizzie’s Favorite Movie: Well, Jon, Josh and I had a very Pirate Easter by watching “Treasure Island” and then “Pirates of the Caribbean”. I also watched “Big Fish” the other night. They were all pretty good.
Lizzie’s Favorite Hobby: motorcycle rebuilding and sewing. What a nice combination…

Lizzie’s Quote of the Post:
Today’s comes from “Big Fish”, in the scene where Edward Bloom is walking next to the little girl Jenny in the forest surrounding the town of Spectre; it’s more like a dialogue quote:
“How old are you?”
“18”
“I’m 8”
“That’s quite a big difference”
“Well, when I’m 18 you’ll be 28, and when I’m 28, you’ll be 38, and that’s not such a big difference”
(The follow-up quote comes from the same movie, only it’s been a bunch of years between the last quote and this one. Edward Bloom has come back to Spectre, and he sees a grown-up Jenny and asks her if she ever married. This is her response:)
“I was 18, he was 28. Turns out it was a big difference.”
Posted by Lizzie Bennett at 6:57 AM 6 comments:

An Ode to Bo 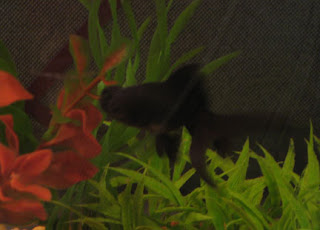 This is an ode to Bo, my poor black, buggy-eyed goldfish. I came into work this morning, and he was dead. Poor Bo.

Here's to my little buggy-eyed goldfish Bo,
Who swam in his tank to and fro.
Bo had a gold tankmate,
a fish named Jangles who ate
all poor Bo's fins off!
But Bo kept his head aloft,
And grew back some fins;
When bored I would watch him spin
circles around the tank.
Now he's gone but I thank
My little fish that entertained.

And so Bo has gone off to the big aquarium in the sky...It's pretty clear that I should never be a poet.
Now to throw off the morbid mood, here are my favorites of the post:

Lizzie's Quote of the Post:
"I can't get this phone to unlock! Hey, someone's calling it!"
—Josh when he was trying to break into Dan's cell phone.
Posted by Lizzie Bennett at 8:16 PM 4 comments: