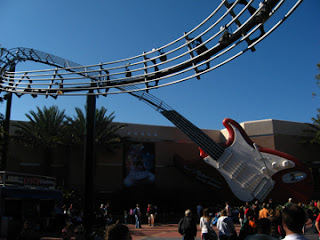 A couple of weeks ago I went to Florida for a little vacation. Boy, was it nice to experience a little bit of warmer weather! I saw motorcyclists all over. Something that you don't see here too much anymore. I went there with my brother Dan and our friend Rob. Oh yeah, and I was sick too. I think I was pretty much on medicine the whole time. But that was okay, medicine lets me still enjoy myself.

Let's see, what did we do? Well, we played several round of mini-golf, I feed hot dogs to baby alligators, we went to Disney for a day, and we went deep sea fishing. I caught two King Mackerals and a shark or two. I felt sorry for the fish, because once I pulled them out of the ocean, they never went back again. Those poor fish. I really only like to catch them and then let them go. I'm still slightly bothered about pulling in fish to die, and I never planned on eating them. I don't like fish. Oh well. I did let the sharks go. I would have been very sad if they were kept and killed. Maybe I'm not cut out to be a fisher person. Oh, wait, I knew that already!

Disney was fun. I was coerced to go on the Rockin' Rollercoaster. Now I can name all the Aerosmith songs that I heard while waiting in line to get on the ride. I really liked the Rockin' Rollercoaster; except for the three loop-de-loops. I did not like them! I tried to curl up in the fetal position when we went into those. I don't know, I think it's some lingering bad memories form that one carnival ride that I went on in high school. Speaking of high school, there were High School Musical stuff all over the place. Ugh! We saw the Indiana Jones Stunt thing, a really cool Lights, Motors, Action show, that had cars, burning rubber tires, fire, motorcycles, and stunts! It was awesome! I could go see that one again, definitely.

We ate at some fancy-ish restaurants, but my personal favorite was the German Biergarden in Epcot. A buffet that was scrumptously filled with meat, sausage, pretzel bread, pudding with chocolate shavings on it, and delicious carrots and potatoes. Mmmm, mm. And there were yodelers there who played all kinds of German instrumants and folk songs. Very fun! I needed a vacation. It was about time for one. 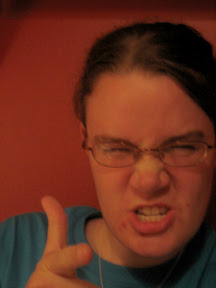 Guess what! I put in my application to get my FOID card. That means I could own a gun, and shoot one in some places. Sweet. I forgot to put my height in on the application though. I hope they don't completely reject me for that. The photo you see here was one of my outtakes for the FOID photo. Somehow, I didn't think that the state police would look kindly on someone who looks like this. So I sent a better one. One that looks more sane. The police might like that one better.

So let's see, what have I been up to recently... I went on Saturday to Anderson's book store and met the author/illustrator of the Skippyjon Jones books and got a book signed by her. That was fun. I went with Meredith and her roommate from school Kendra. Then I had to race home, throw on my wedding clothes, and hop in the car to go to my cousin's wedding. My family was saying that I was going to make them all late, but please note that I was the first one outside waiting to get into the car. The wedding was very nice and a lot of fun. I made my feet hurt really bad by dancing away a lot of hours on the dance floor in my high heels. Well, more like medium heels. But my feet still hurt today. I hope they're better by tomorrow.

So, that about sums up what I;ve done recently. Oh, except for this: On Halloween, I dressed up in my 1770s dress and me and Dan and several of our friends went out to TGI Friday's dressed up in costume. You know, you just have to take advantage of the one day in the year where you can dress up in a costume and no one looks at you funny. And then we went to someone's house and watched Ghostbusters. That's about as scary as I want to get in my movies.

Lizzie's Favorites:
Lizzie's Favorite Book: Skippyjon Jones. "Holy Guacamole!"
Lizzie's Favorite Movie: I could say Everything in Illuminated, but I fell asleep and missed a lot, so I'll say the Office, even though it's technically not a "movie".
Lizzie's Favorite Hobby: Trying to find time to do things other than being a social butterfly. I find I have developed a very active social life every weekend...

Oh, I'm going to Florida in less than two weeks. That should be a lot of fun.
Posted by Lizzie Bennett at 4:24 PM 5 comments: