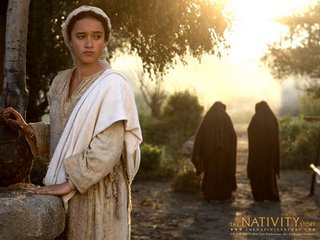 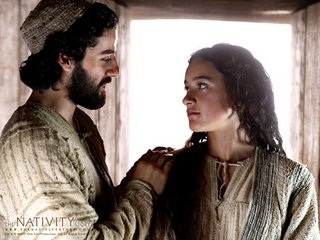 I had the unique opportunity this past week (okay, maybe it was almost two weeks ago) to see a private screening of "the Nativity Story". Because I work at Tyndale and we partnered with New Line to put out some books tied to the film, I was able to go. Some people were more priveledged than I though, Jen and Jackie from the Design department got to go to the Hollywood premire! Anyway, I saw the movie on the Monday before Thanksgiving, and I though it was excellent! The main part I was concerned about was that, being made in Hollywood it would be "dumbed down" so to speak, and that they would generalize it so that it "wouldn't offend people of other faiths". But they didn't! So I was happy. It was done very well (I thought, although some of my fellows designer co-workers were a little more critical, they're film critics). In my opinion, and my mom agrees (she saw it with me), it was very accurate to the Bible, and how could I say the plot line was bad? It's the begining of the most amazing story of all! That God would love us miserable humans so much, that by sending His Son down to Earth to be with us, to live with us, to suffer all the mean things we do to eachother, and ultimately, to give His life for us, that our sins might be atoned for! Who can call that a bad story? It's beautiful! So the Nativity Story portrays the begining of the demonstration of the love that God has for us, and that in itself is a powerful story.

Since the movie opens today, I have to reccomend that you go see it. You won't be sorry. You will probably leave a changed person. I give it four stars... or is five the highest? Either way, you get my point.

Now, You might be wondering; What is Lizzie doing updating her blog on a Friday at 7:38 am? Shouldn't she be on her way to work? Well, I would be, but it's snowing and so treacherous, that they decided to start work late! Hooray! A partial snow day! So I'm alrady out of bed, showered, and dressed, now what do I do? Certainly not go back to bed! Carpe Diem! Let's seize the moment and update my blog. You're reading the fruits of my labor then. I hope you enjoyed it.

But now it's getting close to the time when I should start to get ready to leave for work...again, so I'll leave off with my favorites:
Lizzie's favorite movie: In theaters, "The Nativity Story", on DVD, Disney's "Robin Hood"! Oo-de-lally!
Lizzie's favorite book: I've only been reading "Ivanhoe" for more than a month! I can't say it's my favorite though. Sir Walter Scott uses a LOT of words to get to the point!
Lizzie's favorite music: I'd have to say Bing Crosby's "White Christmas" and "Begining to Look a lot Like Christmas" (Is that even the name of that song?)