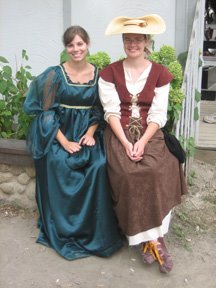 Good morrow to you! Or good day, depending on the time. This last Sunday, I went to the Bristol Renaissance Faire. The Lady Fair and I decided to make costumes from the period to wear to the fair, which you see pictured to the left. The fair was on Sunday, and we started sewing (and shopping for) them on Wednesday evening. It was a lot of fun making a rush project. At least for me it was. I am garbed as a peasant. Except for the hat, that might not be exactly peasant, but I bought it at the fair for another costume, and the best way to transport it was to wear it. See my shoes? I made those too. They actually weren't too bad, although I got quite dusty feet.

The fair itself was very fun. It does attract quite a few... interesting... people. There were a score of girls clad in chain mail bras. Um, being a fan of historical dress and costume, I can tell you that no girl would've worn that, not to mention that it would have been thought extremely improper! Sorry girls, in your attempt to be medieval, you became historically inaccurate.

There were tons of little shops that for the most part sold medieval and renaissance stuff. Of course, my favorites were the costume stores. It was there that I realized how much money I save myself by making my own! We saw a joust-to-the-death match, complete with swordplay and blood! All the costumes that the workers were wearing were magnificent, and a lot of the visitors weren't bad either (except for the chain mail girls). I've taken away inspiration from all the good ones to better my own renaissace outfit, just a few touches to add to the authenticity.

There was a guy selling flowers, trying to get the "lords" to buy a rose for their "lady". Eventually Dan caved and bought one for Aubrie, and the flower guy was making a big deal on how he should present it to her. That was pretty funny to watch. Then after that he came over to me and asked which "lord" belonged to me. Well, I answered none of them, and told him that maybe I'd come back next year with a lord. He laughed and said I should come back next week!

So the fair was a blast, as you can gather. That whole incident in the latter paragraph showed something to me though, and I was very glad to see it. Simply put, it was this: More than a month ago, I would have looked upon that whole scene with a tinge of bitterness, wishing it were me. Now that I've been praying about it, I found myself perfectly natural about it, and calm, and I was able to joke with the flower man without feeling cynical. It's amazing! God truely does answer prayer. While we're on the subject, I'll mention that I've put Mr. P behind me once and for all. It was clearly (I only see it now though) an infatuation, driven by my jealousy towards two certain people that I'm close to. I'm not jealous anymore. I'm content.

Peace, or as they say in espanol, paz.
Posted by Lizzie Bennett at 4:53 PM 1 comment:

The Day I Got Arrested 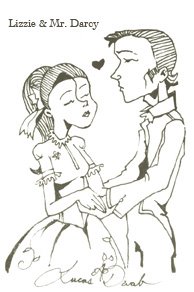 Last week, on a bright and sunny Sunday, I headed out with my family and another family on an adventure of small proportions. Our goal: to picnic and hike around on the famed Starved Rock, of Illinois. We ate a nice lunch of cold cuts and fruits, along with bread and beverages. It was mostly enjoyable. I say mostly enjoyable, because, in fact, several members of our party were having a trying moment that tested those involved immensely over that weekend. But back to the picnic; no sense to draw up ill will at a time like this. The picnic was nice, and after packing up the assortment of edible goods, we ventured off into the wild unknown of the cleared out hiking path. No obstacles, nothing more exciting than the occasional muddy stretch of road. To one who has hiked the wilds of the Smokey Mountains, this was a cinch! A short trek rewarded us with towering cliff walls and signs affixed to them that read "no rock climbing, no swimming". We pressed on, and found, at a turnoff of sorts, a great pond filled with sludge. Then, another pathway veered off to the side, and it led up a hill! At last, a trail that was reminiscent of the rocky and rooty paths up the mountains of Tennessee! We trekked up, much to our enjoyment, and found, upon reaching the top, a creek of sorts, that wound through a gully and slipped over some rocks before tumbling to the depths of a small canyon. We stooped to rest and take in the sights, enjoying God's beautiful creation, and sending little sticks over the petite waterfall. I went to sit on a large boulder that overlooked the small canyon, and I was joined by my friend. We just sat there in silence, enjoying the serenity, and not saying much. Several other hikers went gallivanting by, but that was it. Later, I decided to go exploring a short distance away because the tension was so thick in the camp, I could have cut it with a blunt butter knife. I climbed up some mossy stairs that were carved out of the rock, and came to the top of an outcropping that hung slightly over the creek. While sitting there, I noticed two or three noble enforcers of the law, walking by with their watchdog.
"Ah," I thought, "they are going after those young hooligans who were here before us. I bet they had some illegal substances for ones so underage."
But then a strange thing happened. They stopped, looked at us, and signaled for us all to come over by them. So we did. We had no reason to worry, we were on a cleared out trail and we weren't climbing the cliffs or swimming in the tepid water. We reached the stately officers and suddenly, they grabbed us and clapped us in irons! They had their sniffer dog sniff through all our stuff and it sniffed us too! Then they escorted us through the trail, back down the hill trail, and across the forest trail. We stopped at intervals to wait for more prisoners, and then we would hike some more, through the brutal heat with no water. A man and a woman and their little dog walked by and talked to the police. Hey, I had seen them hiking along that trail earlier! Turns out, they were narcs! And their little narc dog too! Without much ceremony we were hustled along until we reached the parking lot were the car was. There was a paddy wagon waiting there, with armed guards on either side. My brother risked the wrath of the cops, and asked what we were being arrested for. The answer was startling.
"For leaving the trails, a crime punishable by imprisonment. You have just committed a class B felony!" shouted the big officer with the handlebar mustache.

"Gee wiz! We had no idea the path even ended!"
"Didn't you see the sign?" This was the narc speaking.
"The sign that said no climbing!"
"That? We weren't climbing rocks, we walked up a cleared pathway! It wasn't even roped off!"
"Well you should've followed the map at the trailhead."
Map at the trailhead? I looked around, no sign, oh wait! There, twelve feet off the trail, and overgrown with weeds and a tree branch covering half of it, was a green podium with a faded and yellowing map attached. What? We were supposed to actually see that thing when we started our hike? I didn't even know to look for one, and I surely would have never found it while it was buried! But before I could utter another word, I was hoisted into the paddy wagon along with everyone else. A metal door slammed in place. Then, with a start, the vehicle rolled away. Away from our car, the forest, the cops. Rumbling down the road, bumping along each crack and pothole in the road. A dismal rain began to fall. The slow, drippy, drizzly depressing type. Ten minutes passed, then a half hour, then 45 minutes. Suddenly, while going around a turn, the wagon began to careen out of control! It started to tip, then fell, with a loud thunk! to the pavement. It was clearly on it's side. The back door creaked, and then in swung lazily open. We all piled out, blinked at the light, and then, in a wild rush of adrenaline, we ran! And I was running! We made it back to our vans by way of a shortcut, and then, we drove like mad hatters out of that place.

And that's my big fish story of being arrested. You decide what was true or not.
Posted by Lizzie Bennett at 6:22 PM 4 comments: