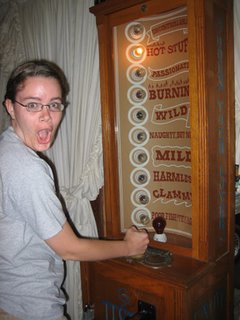 Can you believe it? The wooden box told me I was hot stuff! (Too bad that light was on and I posed for that picture, when I really did it, it said I was... nevermind. Those are dumb games anyway!)

So it's been a couple weeks since my last post. Let's see, what can I tell you, my avid readers, about. There's just so many of you! (Hi Lady Fair) Oh! Here's an interesting bit of news. I'm going to make a Jane Austin-style dress, like from Pride & Prejudice! I'll put a picture of it on here when it's done.

I also moved to a new cube at work. I left the Big Room (sniff sniff!) Although I won't complain, I can see sunlight where I'm at now, and eventually Amber is going to move into the other side of the double cube. One downfall: it's stinking cold out in the hallway! I notice a lot more traffic out there too, back in my old corner I only had visitors if they came there intentionally. Now people come by my cube and stumble upon me, and then they talk to me. That's nice. I bought a new fish for my cube today. Mr. Knightley. How fitting. In case you weren't aware, that's the hero from "Emma". I've started doing jobs too as a Production Artist. They're fun. Currently, you could call me a Production Artist Electronic Systems Assistant. Whew! What a long title!

Now this next part is all hypothetical of course. So let's just say someone liked somebody, but they had no idea what the other person felt. So that person went back and forth all the time, "they like me, they like me not" etc, etc. I think that person would be mentally worn out! And of course, that person wants to make sure they are within God's will too. How complicated. I don't know anyone like that though. That was purely hypothetical.

I think I'm going to go make some paper flowers now. I'm feeling particularly crafty right now. Maybe I'll play a little piano and some dulcimer too. But before I go, I haven't forgotten Lizzie's picks of the week!